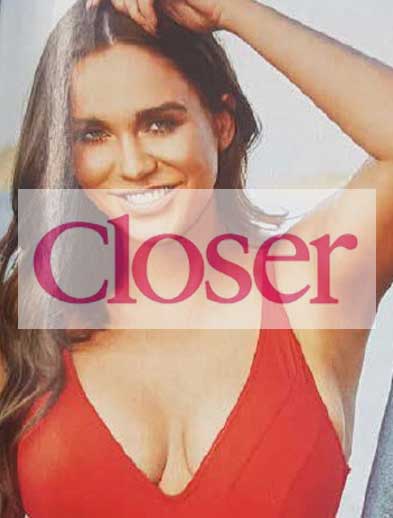 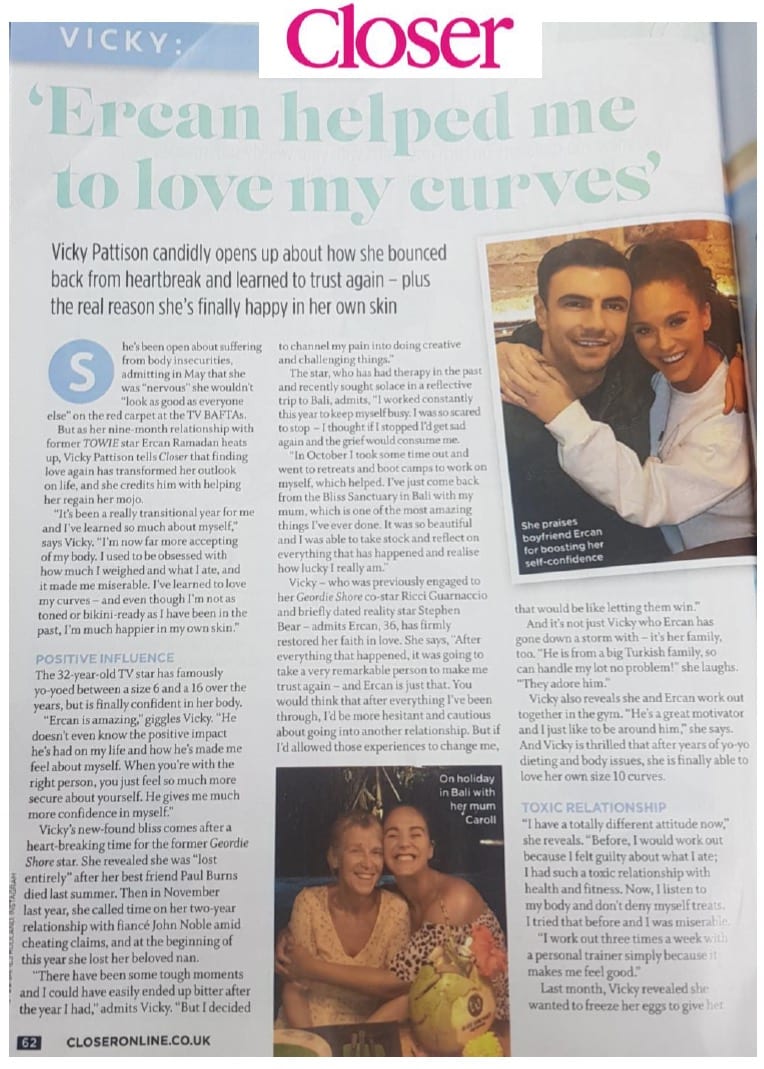 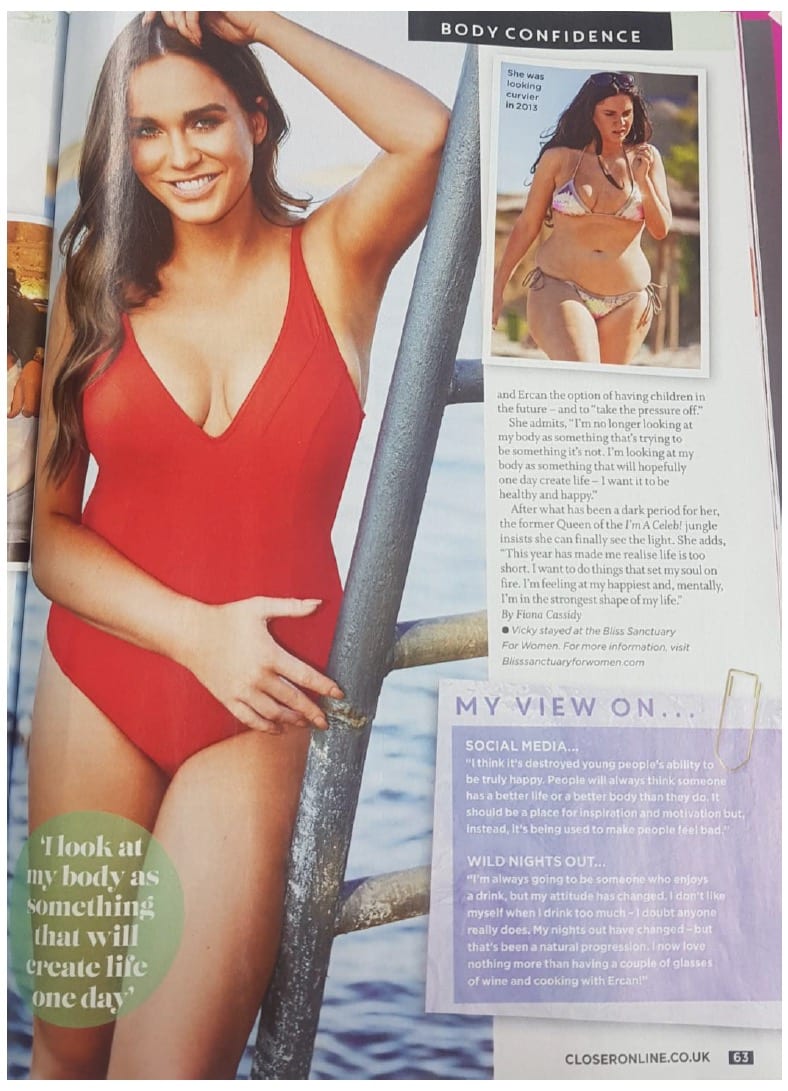 Ercan helped me love my curves

Vicky Pattison candidly opens up about how she bounced, back from heartbreak and learned to trust again – plus the real reason she’s finally happy in her own skin.

She has been open about suffering from body insecurities, admitting in May that she was “nervous” she wouldn’t look as good as everyone else on the red carpet at the TV BAFTAs. But as her nine-month relationship with former TOWIE star Ercan Ramadan heats up, Vicky Pattison tells Closer that finding love again has transformed her outlook on life, and she credits him with helping her regain her mojo.

“It’s been really transitional year for me as I’ve learnt so much about myself” says Vicky. “I’m now far more accepting of my body. I used to be obsessed with how much I weighed and what I ate and it made me miserable. I’ve learnt to love my curves – and even though I’m not as toned or bikini-ready as I have been in the past, I’m much happier in my own skin.

The 32 year old TV star has famously yo-yoed between a size 6 and a 16 over the years but is finally confident in her body.

“Ercan is amazing” giggles Vicky. “He doesn’t even know the positive impact he’s had on my life and now he’s made me feel about myself. When you’re with the right person you just feel so much more secure about yourself. He gives me much more confidence in myself.”

Vicky’s newfound bliss comes after a heartbreaking time for the former Geordie Shore star. She revealed she was “lost entirely” after her best friend Paul Burns died last summer. Then in November last year she called time on her two-year relationship with fiance John Noble amid cheating claims, and at the beginning of the year she lost her beloved nan.

“There have been some tough moments and I could easily ended up bitter after the year I had” admits Vicky. “But I decided to channel my pain into doing creative and challenging things.”

The star, who has had therapy in the past and recently sought solace in a reflective trip to Bali, admits, “I worked constantly this year to keep myself busy. I was so scared to stop – I thought if I stopped I’d get sad again and the grief would consume me.

“In October I took some time out and went to retreats and boot camps to work on myself, which helped. I’ve just come back from the Bliss Sanctuary in Bali with my mum, which is one of the most amazing things I’ve ever done. It was so beautiful and I was able to take stock and reflect on everything that has happened and realise how lucky I really am.”

Vicky – who was previously engaged to Geordie Shore star Ricci Guarnaccio and briefly dated reality star Stephen Bear – admits Ercan, 36, has firmly restored her faith in love. She says “After everything that happened it was going to take a very remarkable person to make me trust again – and Ercan is just that. You would think after everything I’ve been through a bit more hesitant and cautious about going into another relationship. But if I allowed those experiences to change me, that would be like letting them win.”

And it’s not just Vicky Ercan has gone down a storm with – it’s a family to0. “He is from a big Turkish family, so can handle my lot no problem!” she laughs. They adore him.”

Vicky also reveals she and Ercan work out together in the gym. “He’s a great motivator and I just like to be around him,” she says. And Vicky is thrilled that after years of yo-yo dieting and body issues, she is finally able to love her own size 10 curves.

“I have a totally different attitude now” she reveals. “Before, I would work out because I felt guilty about what I ate ; I had such a toxic relationship with health and fitness. Now, I listen to my body and don’t deny myself treats. I tried that before and I was miserable.

I work  out three times a week with a  personal trainer simply because it makes me feel good.”

Last month, Vicky revealed she wanted to freeze her eggs to give her and Ercan the option of having children in the future – and to “take the pressure off.”

After what is in a dark period for her the former Queen of the I’m a Celeb! jungle insists she can finally see the light. She adds, “This year has made me realise life is too short. I want to do things that set my soul on fire. I’m feeling my happiness and, mentally and the strongest shape of my life.”

Social media…
“I think it’s destroyed young people’s ability to be truly happy. People will always think someone has a better life or a better body than they do. It should be a place for inspiration and motivation but, instead, is being used to make people feel bad.”

Wild nights out…
“I’m always going to be someone who enjoys a drink, but my attitude has changed. I don’t like myself and I drink too much – I doubt anyone really does. My nights out have changed – but that’s been a natural progression. I now love nothing more than having a couple of glasses of wine and cooking with Ercan!”

By Fiona Cassidy
Vicki stayed at the Bliss Sanctuary For Women. For more information, visit blisssanctuary.com