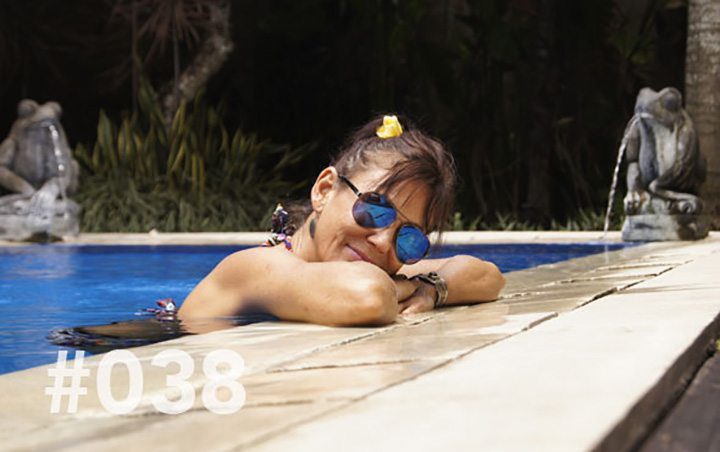 I’ve always believed things happen for a reason but for some of my life I lost the ability to trust this belief and go with the flow.

The past 20 years of my life have been all about ‘getting’, getting the great job,  car, clothes, the school for my daughter (I’m also a single mum) the overseas holidays. I measured my worth, by the amount I had. And I had a lot, from the outside looking in my life and position availed me of pretty much anything I could ask for.

When I looked inside I could see my moral compass wasn’t on true north – (it was spinning out of control if the truth be told!) my life was a series of reactions and nothing I was achieving or getting was really giving me the soul food I so desperately needed.

So I started on my mission to find, peace, serenity, wisdom – I was quite aware the hippies had it, though I was quite the opposite being a high flying corporate woman in a convertible! I would not wear orange, carry mala beads, or heaven forbid, chant.  That was their way, but I was going to find mine.

I searched frantically for inner peace, and with as much effort as I did to my flourishing media sales career, but it alluded me.  I felt like one of those silly mice in a wheel, I think I spotted it on the outside, but I was moving too quickly to catch it.   And then it hit me – I had to stop to find it, I had to be in it to experience it – and so I did.

I sold up, my car, my house, put everything in storage – my daughter had just finished high school and heading to central America to abate her own callings of the world and wanderlust.  So it was perfect timing to start my journey.

I moved to Byron Bay, still desperate not to become a tree hugger, but I started to listen, and absorb and I started to be.  In 2 short years the things I essentially needed seemed to melt away, dissapating of their own accord, slowly, slowly my inner compass was pointing me in the right direction and all I had to do was keep looking and following.  No alcohol, healthy food, and yoga did help!

I did some amazing things there, a huge amount of meditation, music therapy sound bowl healing, yoga, loads of yoga, therapy, family dynamic workshops, art therapy, chrakra meditation, and more.  None of those things was an answer to peace and finding me, but they were all beautiful experiences in which to be aware of what I truly wanted – and now that I’d stopped running and getting – I could more clearly see it, moreover, feel it.

Nearly 2 years ago I met a man, online, heaven forbid, who was in exactly the same point in his life.  P’s passion for work, only work, had withered and his need to explore and learn more to honour his soul was beckoning.  So he did the same, sold the house, sold the car, left the job and we committed ourselves to a life on the road in Asia – The ‘MP Odyssey ‘we called it – and I think it was pretty brave looking back as we’d only know each other for 7 months, and had lived 1000kms apart.

Starting in Sri Lanka, we spent a few months immersing ourselves in the culture.  We never really considered our odyssey as a holiday so we tried to live as much like locals as possible, enjoying the local food, shopping, learning the language and paying respect to what I can only remember as countless Buddhist temples.  They are reverent the Sinhalese that’s for sure.

Next we hit the sub continent, India, which is without a doubt the most incredible place on earth I’ve ever seen, and I have travelled a fair amount.  In 2015 we visited 11 out of the 31 states.  It was like visiting 31 different countries.  The humanities and their differences were striking!  Each has it’s own dress, the way to tie your sarong or sari is imperative – state dependant and show where you come from.  Each has it’s own language, food, culture, and even the earrings they wear!  I had to invest in a lot of last minute acceptable fashion fads.

Despite India being predominately Hindu, each state also sports it’s favourite God, not unlike a favourite footy team for the region.

It really touched us that place – it is truly people living more democratically than elsewhere on the planet, with more tolerance, less judgement, and no sense of entitlement. There is a place for every living creature and no special road privileges or rules are given to rickshaws, cows, cars, chickens or goats.  Everyone beeps their horns if they have one, and everyone gets to where they are going.  The supreme difference is that no one is in a hurry to do so.  It’s hard to not be affected by a country with 1.2 billion people, and the cities like Mumbai and Dehli having as many locals as the whole of Australia where I am from.  But it works.  And they seem to have peace.

We ventured on begrudgingly at first to Thailand, and some other Indonesian islands.  We came to settle in Bali and thought it was as close to Australia, though still in Asia as we could get – and I had been coming for 30 years, speak basic Bahasa and love the food.

Zoe, an old friend from my media sales days posted on Facebook about her business Bliss Sanctuary For Women. I had followed her journey from afar and loved that she had built a retreat for women that supports women traveling on their own and from some of the reviews and things I had read it really seemed like it touched the guests on a deeper level just by creating that space around themselves, just for them. I could really identify with that and although there are many Bali retreats there was something truly unique and inspiring about Bliss.  Bliss was growing. She had just hired a new GM, and Operations Manager though still looking for Sales manager.  The rest is history and I joined the Bliss team.

By offering myself to life, life has come along – I couldn’t be happier as I am doing a job that I love, and in a country I love and in this I have found peace.  P and I are still together almost 2 years on, and both enjoying the journey each day – although he’s becoming a Hindu, which is very cute and colourful, the idea of 1 God is enough for me, let alone 330 million of them!

So when I think about my life mantra ‘everything happens for a reason’, I think only reason can be noted in hindsight, and you can give any event any reason you like if it helps you make sense of the world.
But for me nothing had to ‘happen’.  I had to stop accumulating and just be – allowing myself to embrace every one of life’s moments just as it was.
The reason everything happens is very clear when I look inside and not outside, it’s a big change and a beautiful journey.

I have found my Bliss.  I usually work from home, so I get to practise yoga, type away in a sarong and communicate with other women about coming to find their own version of Bliss at our gorgeous sanctuary. One thing about this peace, it’s not an event, but a process.
And today when I look inside my moral compass isn’t spinning out of control, it’s pointing true north, and if the wind changes, I just adjust my sails.

Everything happens for a reason?

Nothing has any meaning but the meaning we give it and one things for certain…. Life happens, and it’s far to short to not follow your Bliss.

Social Media Contributor at Bliss Sanctuary for Women
Melinda lives in Bali and is a valued member of our Bliss family!